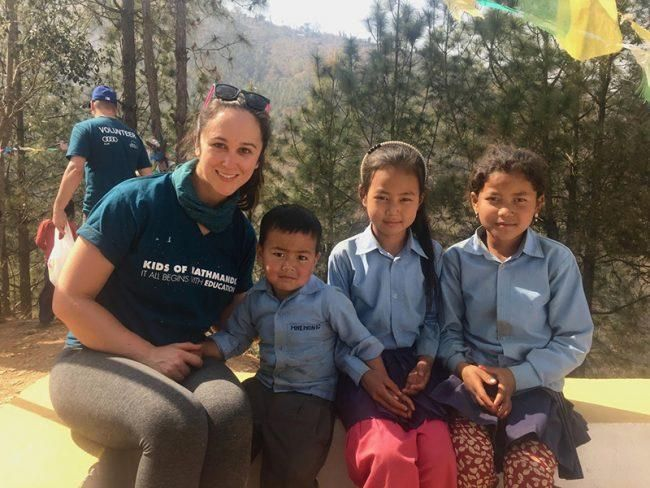 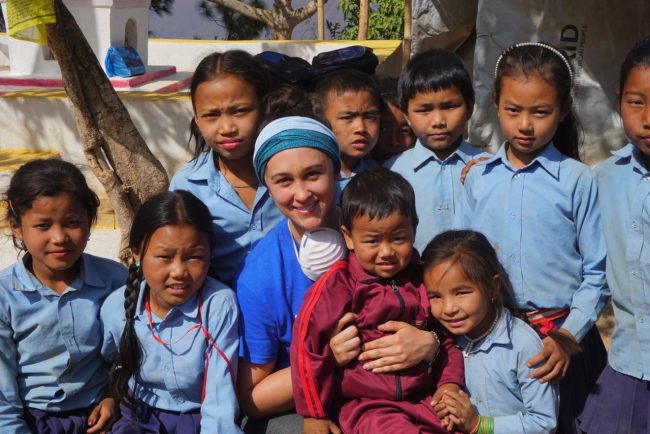 The week I spent in Nepal was one of the most memorable and fulfilling weeks of my life. Along with an amazing group of people, headed up by Bhushan Dahal, Matt McKown, Eric Socia and Kids of Kathmandu. I traveled to a mountain village in the Kavre district – a 4 hour (very bumpy!) drive from Kathmandu. I painted classrooms, built steps for a school and taught English to many of the children. I ate some of the best food I’ve ever had, met many incredible people (everywhere), and learned so much about myself and what truly matters in life.

“The most important thing this experience and the Nepali culture taught me was that we really do create our own happiness.”

As cliche as that sounds, it really hit home for me this trip. Many of us are so fortunate to have what we have, and yet we don’t stop for even a second to be grateful for it. We think that if we just get that one thing we really want, or lose 10 pounds to look a certain way, then we’ll be happy. If this is how you live your life, then you’ll never have true happiness. The people in these villages have “nothing” by our standards, and yet they have everything. They are so genuinely HAPPY! Everyday I saw so many smiles, heard so much laughter, and felt their excitement just because we were there. Take a minute to think about and appreciate all that you have, and smile! 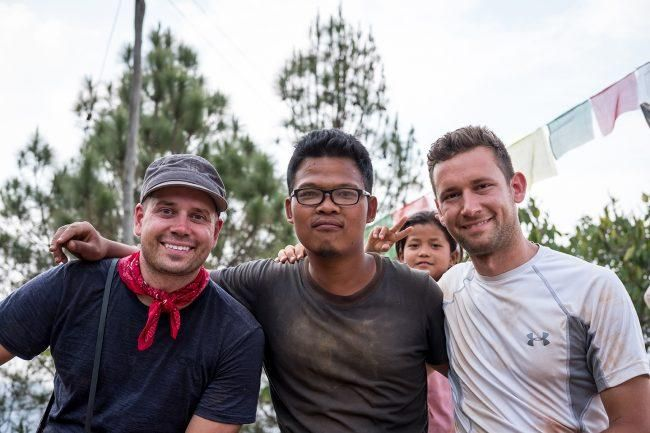 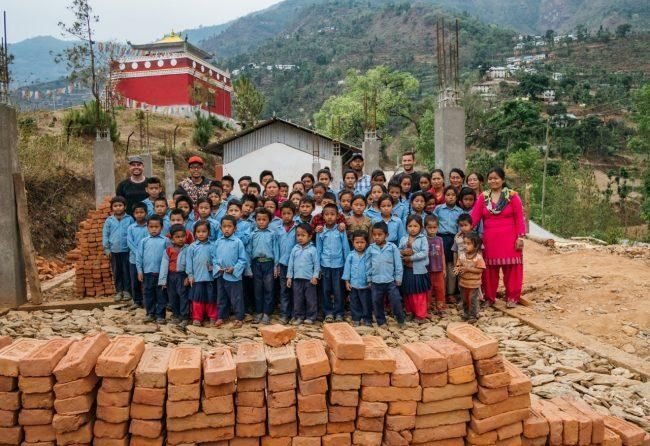 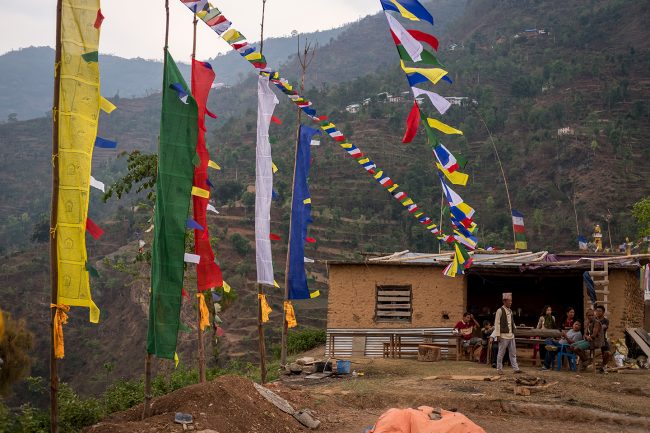 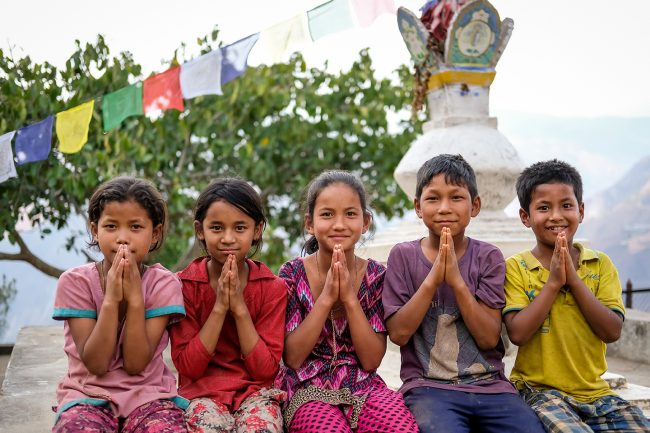 “Before the April 2015 earthquake in Nepal, when I thought of the country I pictured hikers making their way up snowcapped mountains in the Himalayas and a select few trekking to the peak of Mount Everest. When I first heard news of the first earthquake, followed by the subsequent aftershocks, I had no frame of reference for the severity of the damage they had caused. Then photos started to appear on the news and across social media sites showing catastrophic destruction throughout the nation.

When approached with the idea of traveling to Nepal to help out in some way, there was no hesitation; I was in! The issue then became how to help and what organization to work with to have the greatest impact. Over the course of 6 or so months, Eric and I researched dozens of organizations. Many were dead ends with no responses. Others wanted an exorbitant amount of money; most of which went to administrative fees and not the people. We did not give up hope and continued to research, knowing the right group was out there. Then we stumbled upon Kids of Kathmandu. We were able to have a solid back and forth dialogue with the group, money donated went directly to helping the people of Nepal, and their values lined up with what we were looking for out of an organization.
Approximately one year after the earthquake we made our way to Nepal. Wandering the streets of Kathmandu, the amount of destruction was staggering. In many other countries you would expect a lot more progress to have been made. However with a lack of infrastructure in a mountainous region as well as a change in government, progress had been slow going over the past 12 months. Many buildings were completely collapsed while others had visible cracks and structural damage. Seeing a lot of the temples so badly damaged or completely ruined was also heartbreaking. Bricks lined most streets and each day workers were seen manually rebuilding homes and temples with the supplies they had available to them.

Our drive to Kavre was an eventful one. Not knowing the landscape, we didn’t realize the roadways outside of Kathmandu were extremely narrow. As soon as we arrived at the base of the mountains and made our ascent, we found ourselves on a one lane, two-way, dirt and rock road. It was sort of like a bumpy rollercoaster that lasted a few hours until we arrived at our destination. A quick tour of the damaged school and the new building location led right into picking up shovels and getting to work. Each morning and evening we hiked approximately one mile from our host house to the school site. Our days were spent completing the groundwork and foundation for the new four room school.
During recess breaks and after school got out, many of the children would come to see us. At first I think they may have been a little curious as to who we actually were and due to the language barrier, it was difficult to communicate. However, once we took out our cameras and started taking their photographs, the kids really warmed up to us. I shared numerous instant prints with many of the children that allowed me to take their portrait. Pretty soon they were asking Eric and I to take ‘photo! photo!’ every opportunity they had. It was amazing to see these children so happy and cheerful given the conditions they were facing. Not only was their school damaged, but many of the village’s homes were as well. Everyone in the village had an extremely positive outlook on life and if I had to use one word to describe the people of Nepal, it would be ‘resilience.’ Each of the conversations we were able to have people shared their stories with us. Stories of their lives, stories of the village, and stories of the day of the earthquake. Their optimism never wavered and they knew that things would work out for them in the future.

The entire trip was an eye opening experience. Not only were we able to see the destruction first-hand, but we were also able to see the early stages of the rebuilding process.

“Perhaps even more significant was the fact that we were able to truly connect with locals in a way I don’t believe the average tourist could.”

The appreciation the Nepali people had for us lending a hand and the respect we have for them is difficult to put into words. I am extremely thankful that Eric and I were able to work together with Kids of Kathmandu and the entire village of Sarsyukharkha Chukha to make a difference in the children’s education and their future. It was the most rewarding adventure I have ever been on.